11 Most popular Indian spices and their importance

There is no denying that Black Pepper is the king of spices.

India is one of the major producers, consumers and exporters of black pepper in the world.

The leading producers of pepper in India are the southern states – Karnataka, Kerala, and Tamil Nadu.

Cumin has a warm, earthy flavor and aroma with a bit of both sweetness and bitterness.

Gujarat is the single largest producer of cumin in the country accounting for over 60-70% of total production i.e 320 thousand metric tons in fiscal year 2019 and the rest of the output comes from Rajasthan.

Commonly known as Golden Spice. turmeric is a commonly used spice in the Indian kitchen.

Major turmeric producing states in India are the southern states of Telangana, Andhra Pradesh, Tamil Nadu and Karnataka, the eastern states of Odisha and West Bengal, and the western state of Maharashtra.

Cinnamon is a spice that comes from the inner bark of the tropical Cinnamomum tree.

Among the Indian spices producing regions, cinnamon is known to be cultivated in Kerala and Tamil Nadu.

Nutmeg is valued for its sweet aroma especially good combined with cinnamon,

The climatic conditions of Kerala suit nutmeg. Nutmeg is also cultivated in Kanyakumari and Tirunelveli districts of Tamil Nadu.

Has a Strong aroma and hot and pungent in taste, cloves are used to flavour many foods.

Saffron is considered one of the world’s most expensive spices.

Jammu and Kashmir is the only state in India producing saffron.

Most Indian households use mustard seeds or its oil for various purposes.

Uttar Pradesh is a leading mustard producing state of India 60% of total mustard production is from this state. Other than U.P it is grown on a large scale in Rajasthan, Madhya Pradesh, Haryana, Punjab, Assam, Bihar, Gujarat, West Bengal.

This is one of the strongest spices with a pungent flavour from India.

In India it is grown in the sub Himalayan region of northern part of India specifically from Jammu and Kashmir and in some parts of Punjab.

This stood at nearly 168 thousand metric tons followed by Maharashtra and West Bengal.

The Indian spices benefits for health

Stat to know about Indian Spices

The production volume of spices amounted to over 940 thousand metric tons in the state of Rajasthan in fiscal year 2019, making it the largest producer across India. 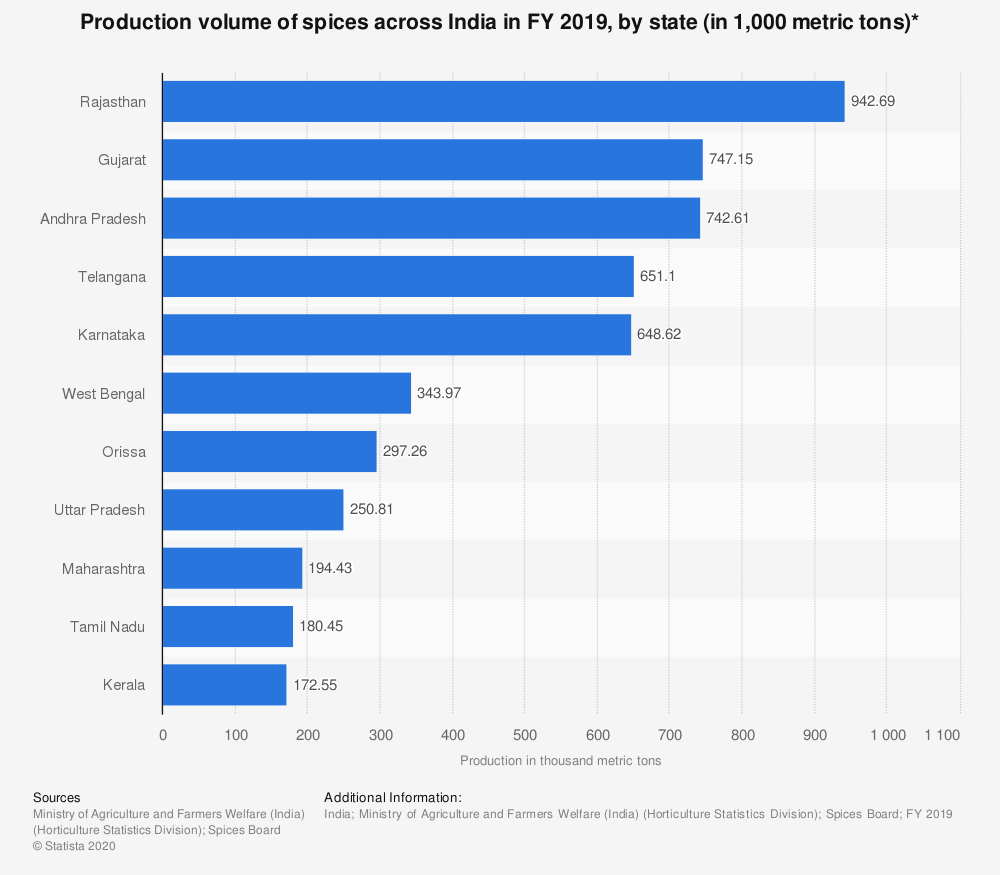 Thank you for your time. Do let us know if you liked our blog in the comments below!

Yellow Spice – A Healthy Addition to a Healthy Meal

The Statue of Unity Information & facts

In this blog, we have mentioned important information & facts about the statue of unity which can help…

The Statue Of Unity

The Statue of Unity is a testimonial of the life of Sardar Patel, a role model of unity and…

“Build a bridge, Connect Cities & Get known” Bridges on the top of the list just not because…

15 likes 0 comments
How you can save lives by staying at home in this pandemic. ! 🤔